The S6 Edge+ on the celestial backdrop of an Alki Tee

I’m among the legion of baby boomers who have chosen iPhone for its ease of use, clean design, reliability and impeccable craftsmanship. The iPhone is a symbol of prestige, too. They’re expensive. Having the latest and greatest iPhone says, “I can afford it.”

iPhone isn’t just for boomers—it appeals to everyone. The millennials in my life, all now earning solid incomes, love their iPhones. I’ve seen a group them influence a lone Android user to switch.

So, how can an Apple fangirl learn to love “Android?”

I’ve been using the Samsung Galaxy 6 Edge Plus (S6 Edge+) for about two months. I was able to “get on board” quickly after an initial adjustment to the user interface, and the more I use it, the more I like it.

Edge notifications save your battery

I’m spoiled by some of the conveniences, like the notification feed on the S6 Edge+ screen (visible without opening my phone), or the bar along the top displaying icons for emails, messages or updates. With a simple wipe down from the top of the screen, it opens small summaries that I can select and open, or swipe out of the way.

And even the keyboard seems friendlier. I don’t have to toggle to access numbers, and emojis are easily accessible. Predictive text  is automatically on, and I like how the device seems to learn from my activity what I might say, or which hashtags I might use. Some people hate predictive text, but it works for me. If you don’t like it, you can easily disable this feature.

A great comparison of the Apple and Samsung devices can be found here.

The S6 Edge+ camera is amazing.

The image resolution on the S6 Edge+ is 16 megapixel (MP) and it shoots video in 4K.

What does 16 MP mean? 16 megapixels captures twice the amount of visual information compared to an iPhone 6. Why should you care about the “pixel depth,” or the amount of megapixels?  For one, it allows you to capture enough information so you can enlarge and crop a picture and still retain sharpness. It gives you more room to play around with the photos you shoot.

More MP also enables the image quality to be closer to the quality of film. More MP makes it possible to blow up an image and to turn into a large print or poster, retaining crispness.

The beautiful high definition display has 3.6 times more pixels than the iPhone 6.

Its clarity is stunning. When our youngest son stopped by few weeks ago, it was the first thing he noticed when he picked up and inspected the S6 Edge+.

And as I mentioned in my earlier post, the screen casting feature works fantastically! Screen casting means you can share what’s on your phone onto a smart TV. That means it’s large enough for everyone to enjoy. (How to mirror)

Menu of some of the options available

More great features for the taking

Object tracking autofocus will follow what you’re shooting and keep it in focus as it moves; and optical image stabilization will keep your image steady. Anyone with active kids or grandkids will really appreciate these two features when shooting video.

Virtual shot is cool, too. You can shoot a stationary object by circling it, and get a dimensional view of it. Wild!

With the holidays quickly approaching, I’m sure some great deals can be found on the S6 Edge+. The regular retail price is $768 (slightly more than the iPhone 6s Plus at $749.99). But you get an awful lot of bang for your buck, including Samsung Pay.

You can leave your credit cards at home when you use Samsung Pay. it uses your fingerprint to identify you, so it’s very secure. It didn’t take me long to get into the habit of using it because it’s super easy and convenient. Samsung Pay is accepted by more merchants than Apple Pay. and works well with older retail credit card terminals.

It’s fun it is to see the raised eyebrows from merchants who totally don’t expect it to work. Two days ago I went into Walgreens, and the cashier tried to get me to hold the phone up against the NFC receiver. I simply held the phone over the credit card swipe area, and Voila! He just sighed and said technology is changing so quickly—it’s hard to keep up!

So I hope this post is helpful. Leave a shout here if you have questions about this device, and if I can’t answer them, I’ll find someone who can!

As Samsung says, it’s not a phone—it’s a galaxy.

Verizon Wireless has given me the opportunity to use some of their products. 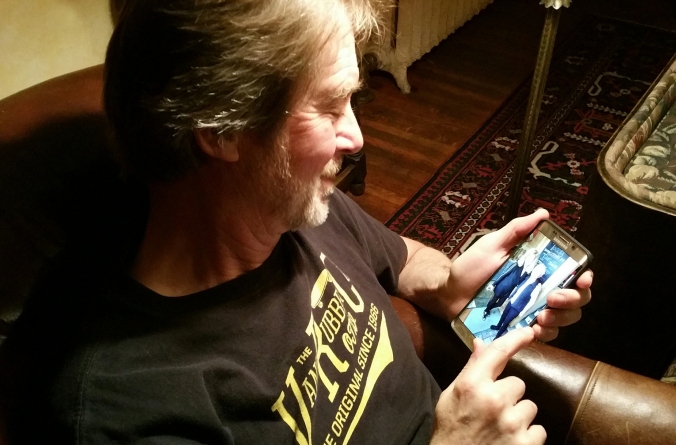 I think I’ve mentioned, my husband is somewhat of a neo-Luddite. So when I handed him the new Samsung Edge 6 plus (S6 Edge+) to take with him to our Randle property on AirBNB, he offered a pained expression that said, “Oh, no. This is new. I don’t like it.”

We sat down and I recorded his fingerprint before he left Seattle. He didn’t understand WHY, but went through the drill. Well acquainted with entering a password to get into a device, he thought it was pretty cool when he found out he could unlock the phone by simply using his fingerprint!

There are many cool things about the S6 Edge+, which by the way, is the first Android phone I’ve used that I actually LOVE.

First, the “edge” in the name refers to the rounded sides of its elegant front face. It’s not just pretty. It feels nice in your hand. It feels luxurious.

The device feels light, but sturdy.

The “edge” on the S6 Edge+ is beautiful industrial design, but actually offers functionality. It saves power because you can access information, notifications and important contacts without drawing energy to light the entire display. The most obvious thing: the Night Clock quietly displays the date, time and battery power left in the phone. Very convenient! Also, you can set it so the edge will silently light up when messages or notifications arrive.

How do you read notifications along the edge? At first I didn’t think it would be practical or useful. But if you swipe your finger back and forth along the edge three times, it brings up the clock, but also offers news, comments on posts or whatever you adjust to appear in the feed—again without lighting the entire screen. Very cool!

Another great thing is the “tabs.” I set it up the “people” edge, that lists my favorite people (including family members and Reg Saddler @zaibatsu) and the “apps” edge, which currently includes Google Play Music, email, AirBNB, Instagram and my photo gallery.

I’ve always used iTunes for music, but at Reg’s urging a few years ago, I synced my music library with Google Play. And am I glad I did! With the Google Play “Music” app, you can set it to create a station based on a favorite song in your library. My mind was blown when it delivered a ton of great, NEW music I’d never heard before—truly stunning discoveries!

The 16MP back camera is great, and the 5MP front camera is solid. When the S6 Edge+ is asleep, simply tap the home button twice to open the camera. By clicking the arrow at the top of the screen, the in-context explanations of various features are easily understood and accessible. Tap again to collapse the information. Swipe the main screen from left to right to reveal options like pro settings, panorama mode, virtual shot, selective focus and other features, including “Live Cast.”

Similar to Meerkat or Periscope (sans social integration), Live Cast, lets you post the video to YouTube for later viewing.

Oh, and it’s easy to take a screenshot on the S6 Edge+. Just hold down the “home” and power lock keys simultaneously.

One of the most fun features is “casting.” If you have a smart TV where the phone and TV are on the same wifi network, you can play whatever you’re watching on your phone onto the TV screen. And I’ve learned you can reverse the process—having something from the TV appear on your phone. It was really fun to be in the University Village Verizon “Smart Store Plus” in Seattle, and broadcast the time lapse video of Jimmy Kimmel’s NY set being built, onto a big screen across the room.

Taking on Apple Pay, Samsung has integrated Samsung Pay into theS6 Edge+ and Galaxy Note 5. It allows you to load your debit or credit cards and use the magnetic credit card swiper on credit card terminals.

No, your phone doesn’t go through the swiper! But it magically communicates via uniquely created tokens for each transaction. At our store we have a new chip-and NFC-compatible card swiper, but Samsung Pay actually works with old-school credit card swipers, even if your phone is in an Otter Box case!

Once you’ve loaded Samsung Pay and connected a credit card, a translucent tab appears at the bottom of your home screen. At any time you can swipe up and instantly use your credit card by scanning your fingerprint.

UPDATE: 10/31/15—I used Samsung Pay at the veterinarian’s office today. They use Square. It worked FLAWLESSLY and the other animal owners in the reception area were amazed. The staff gushed, “We’ve never seen that before!” It was awesome! NOTE: it does “not” work with credit card swipers built into a keyboard or monitor—(does it, Elena?)

The S6 Edge+, with its 5.7″ screen, is a terrific entertainment device, but with its split-screen functionality, makes it a great business tool as well. Imagine being able to have two windows open, and do “live’ drag-and-drop from one window into the next. Very sweet!

There are myriad other great things about this phone. I’ve just scratched the surface, and continue to discover new features that are mind boggling. I can honestly say, as a 3-decade-plus Mac user, and dedicated iPhone user, this is a terrific device that I think many iPhone users could easily come to love. I know I have, and I’d say that even if Verizon hadn’t sent this product for me to experience.

Until November 15, 2015, you can receive a free wireless charging pad (value: $49.95), by loading Samsung Pay on your and connecting it to one payment source! I went through the process, and Samsung promptly sent an email to verify some information. It was a piece of cake!

Eligible devices include the Edge6, S6 Edge+, Galaxy Note 5, and Galaxy 6 on Verizon, ATT, T-Mobile, Sprint and US Cellular. Connectable cards include American Express; and Visa and Mastercard issued by banks listed in the above offer.

Photos shot with the Samsung Edge 6 Plus and Samsung Galaxy Note 4.

The Horsfall House in Randle, WA