I’ve been using Instagram since April of 2011 when the site was about 6 months old. It seemed like a creative challenge and I didn’t know if I was up to the task. Back then I was most likely shooting photos with an iPhone 4 or 4s (can’t remember which) capturing images at less than 400 pixels per inch. By comparison, the Pixel 2 and Pixel 2 XL I now use are capturing 12.3 megapixel images—so massively greater image clarity is possible.

Looking back at my early photos, they look kind of awful. Despite some images with halfway decent composition, the clarity is “not good.”  Below is a sample, and you can follow the link to blog post with more examples and “tips.”

I’m not good at “gaming” followers, and unlike many of the huge accounts out there, I have never bought any. So while I was doing “okay,” my account was never great. Then it got worse. In 2016 I accepted a full-time job. It was demanding and negatively impacted my ability to create and engage on most of my social channels, including Instagram. I was basically on “maintenance mode.” I tried to post an image most days, but weeks or months would go by, and I would “like” a bunch of photos, but I wouldn’t exchange comments with anyone! Needless to say, my account stagnated, I lost followers, and I’d be lucky to get 30 or 50 “likes on an image. I was stuck at about 2800 followers and nothing I did seemed to make a difference.

Some of you who know me pretty well are aware I left my job about a month and a half ago. The reason is long and boring, but suffice it to say I’m on the road to recovery and feeling better each day, and one thing that has been soul replenishing is reconnecting with people on social media. Engagement has been essential. I’m now up to about 4100 followers and have made lots of fabulous connections with fun and interesting new people.

Assessing my Instagram situation, I realized there are now a lot of great photographers  there, some of whom have massive audiences, and I seriously needed to up my game. The first order of business was to be more thoughtful about what I was shooting; then looking at how I was prepping the work, and how I framed the image’s narrative. I’ve been a brand partner of Verizon for about 5 years and I wanted to do a better job representing their products and service, so it meant changing up the way I had been doing things. Instead of “maintenance mode,” it was more like, “Banzai!”

I’m going to share a series of “before and after” photos, so you can see what a difference it makes to properly prepare your images. This means cropping, sharpening, adjusting contrast, boosting the color saturation, and applying filters.

Kind of a “blah” shot of Alki Beach, right?

After being cropped, adjusted and filtered, it looks so much more interesting, AND detail in the bird that I didn’t even know was there, shows up.

One thing I’d like to say about Instagram — there is no shortage of brainy people there. Seems that each time I post something and don’t know what it is, a number of viewers will chime in and school me! An example is this shot below. I didn’t know what the flower was, and boy, did I get some great feedback!

The bee isn’t very apparent. Maybe because there are many distracting things in the shot, plus the color is subdued. 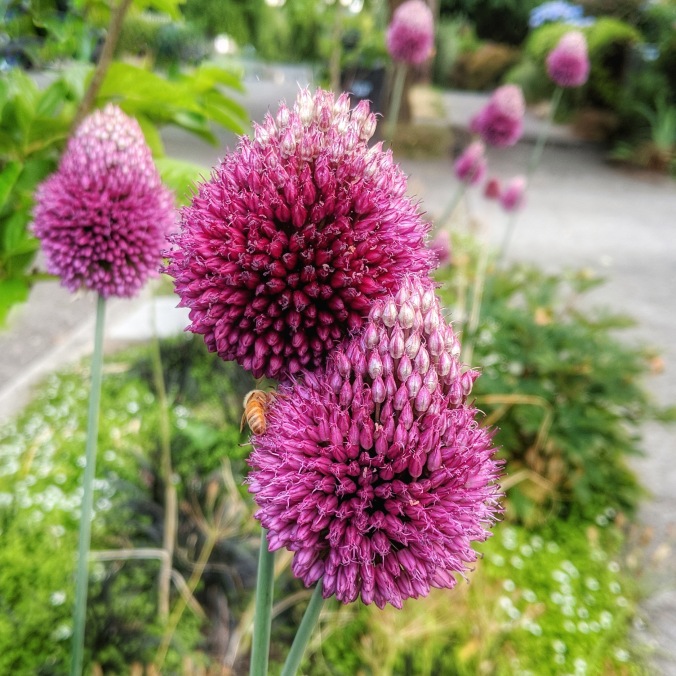 That’s better! And as Verizon says, “Better Matters!” And for the record, the flower is an Allium.

Reg Saddle @zaibatsu and I frequently discuss things like what the algorithms are rewarding or penalizing, and how it affects what we do. One of the things we go back to is what our audiences want. Think about what you post and which things get the most traction.

Here’s something “off the beaten path” for my feed — a glassblower in the Glassy Baby hot shop, not far from where I live. One of the most necessary steps was to crop this photo. You’ll see what I mean. 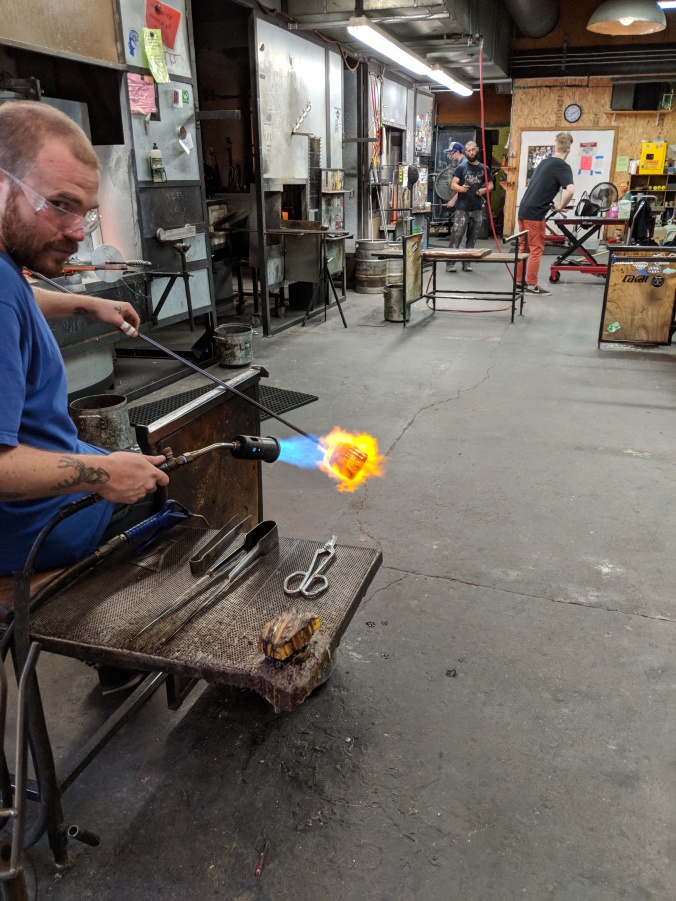 Interesting but a lot going on, right? Below: where the action is. 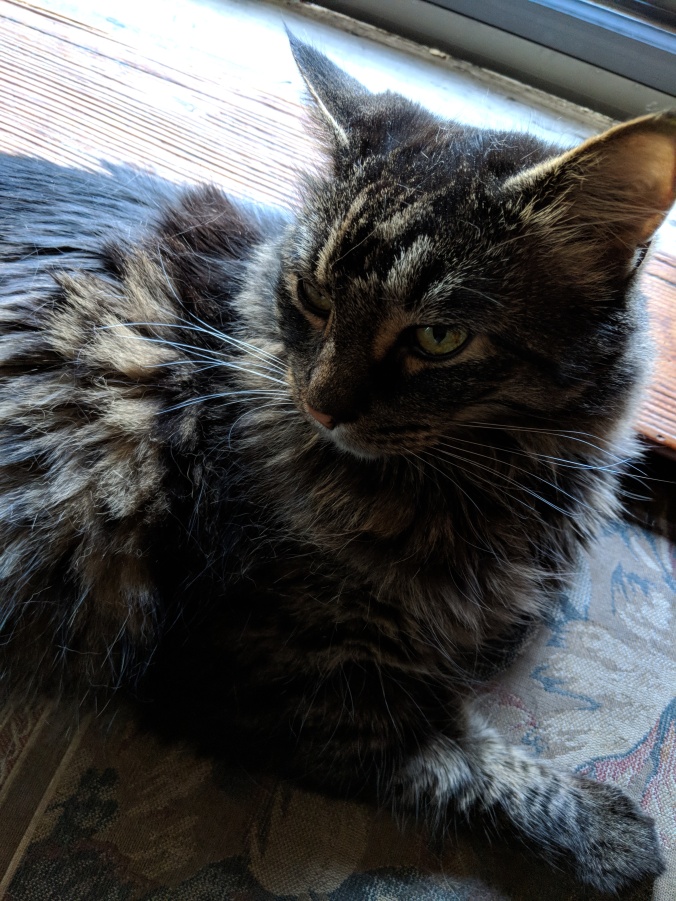 My “boyfriend,” Hunter. Dark. But cropped and adjusted:

I don’t know about you, but our cats are shedding like crazy!

So my brother-in-law is the head of the California Leafy Greens Board. His wife (is she my sister-in-law?) said this is NOT a thistle. But man. I’ve never seen an artichoke this tall. The main thing is, too much is going on and did you see the bee? Take a look:

I almost hate to show you this one. Check out this tree photo, taken on a dreary Seattle day in late spring. I have a thing about shooting UP a tree. This is a classic case.

I didn’t like the way the trunk was drawing the eye away in the bottom right corner. Cropping was calling. But how about those colors? Drab! 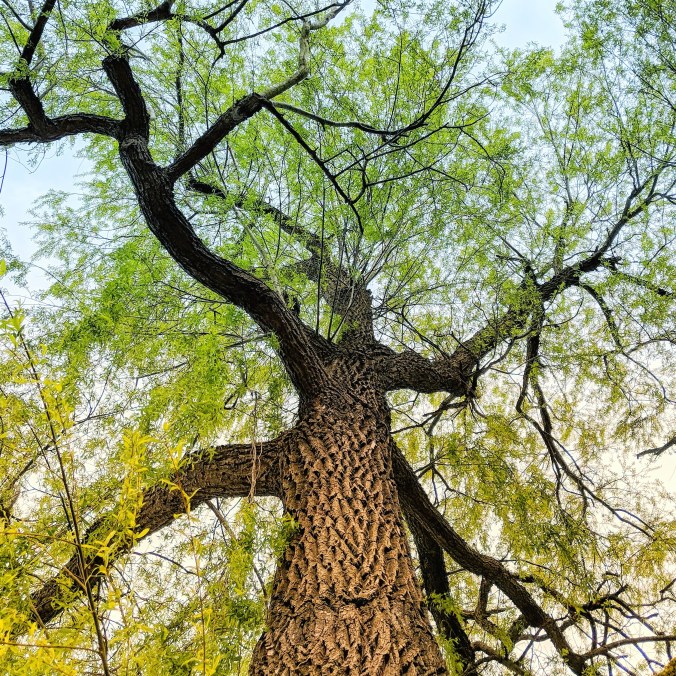 Through the miracle of filters, the tree came to life! 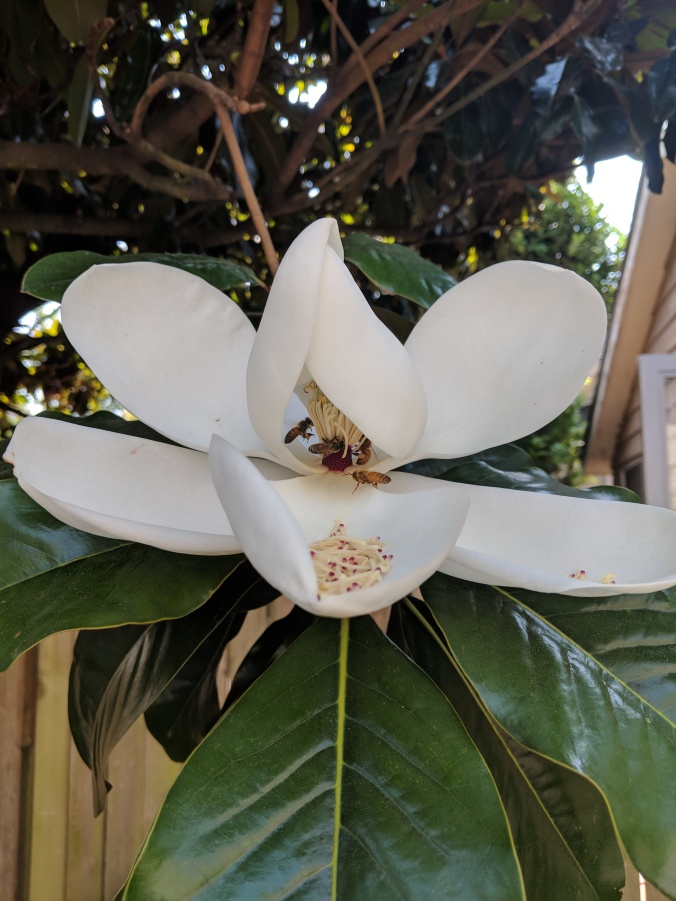 So this is a weird one. I noticed this magnolia blossom was so heavy, the bough brought the blossom to my eye level. When I peered inside, I was like, “WHAT?!?” Very cool, but I knew there was potential in making this better. As shown below, I cleaned up the shot, and there is now more detail and clarity.

Yes, folks. The bees were having a cabana party! Interestingly the following day, ZIP. 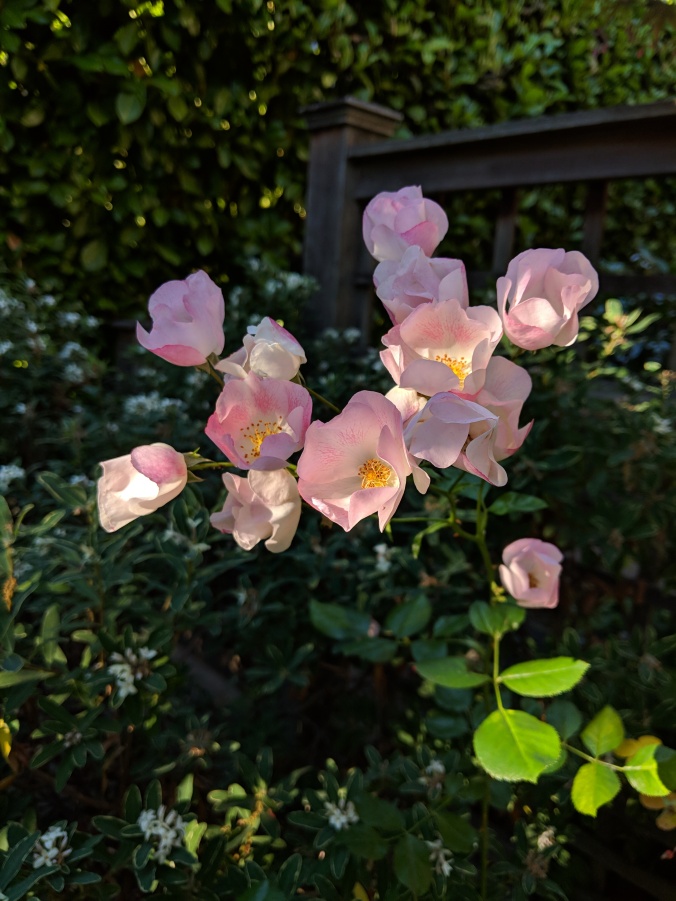 This shot is just plain beautiful any way you look at it. But even something this perfect can look better through cropping and a number of adjustments.

So, you can see that even a somewhat hopeless-looking photo has potential. It’s about post-production. Some things to think about:

I’ve witnessed incredible transformations of the images posted by beginners who then found their mojo. Their photos went from “not good” to amazing!

If you’re NOT on Instagram, what are you waiting for? 🙂

If you have any questions or comments, I would love to hear from you. Just let me know!

How a campaign was born

Commercial ads are a necessary evil. Most of us tune them out. TiVos, DVRs and similar devices are popular because they help us do that.

But when you see a great ad, you want to see it again and again and sometimes, even share it with others. A friend, Reg Saddler says because of the way he now consumes content, he doesn’t have to watch commercials anymore. So when he actually sees one, it’s like, “Hey, a commercial!”

Wieden+Kennedy in Portland, OR has done its best to create some watch-worthy ads.

Whether you know it or not, you’ve probably seen some of W+K’s handiwork. Some of their clients include Chrysler, Coca Cola, KFC, Old Spice, Nike, Samsung and Verizon. Here are a couple of classics:

When I first saw W+K’s Old Spice commercial, I thought it was hilarious. “Old Spice?” It was a moribund brand that W+K miraculously brought back to life. I even remember tweeting a link to watch it. That’s how good it was.

W+K isn’t a household name except to people connected to the advertising industry. In my view, having such an amazing agency in the Pacific Northwest is a point of pride. W+K’s creativity has been recognized through Clio awards (the “Oscars” of advertising), Addys (American Advertising Federation), The One Show, and Cannes Lions, and other arbiters of advertising greatness. They rock!

Do you wonder how commercials are created? Do writers and art directors sit around in altered states to come up with some of the crazy ideas we see? Or are the ideas data-driven to tickle the brains of the target audience? Or are some ads simply random shots in the dark? How DOES the creative process unfold? 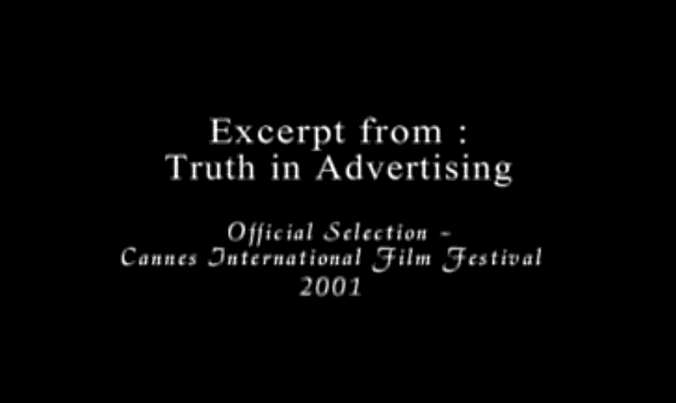 Wacky ads are popular. The hope is to break through the thrum of other advertising messages and also stand in contrast to programming. Lame ads have been accepted as the norm, and many commercials are noise, at best.

Last fall I started noticing some nice Verizon spots on TV. They were smart. The concepts were wonderfully illustrated. They were nicely produced. Their intelligence could almost be described as disruptive.

In February I became curious, and learned the current Verizon branding campaign has been the work of W+K.

It all started to make sense.

#BetterMatters is the campaign concept underlying the commercials and print ads we’re seeing. On the surface, it seems pretty obvious — yes, “better matters,” but what does it mean?

I wanted to know about how the campaign came about, so I contacted the agency in Portland. Katie Hull in W+K’s PR department was helpful, and pointed me to some useful background.

In announcing the campaign, Melissa Garlick, Verizon Sr. VP, Brand Creative said, “At its core, “Better Matters” exemplifies that the network you choose and the access it provides, makes a difference. Better is how we differentiate our brand in the marketplace. We realized that one out of every three Americans is a Verizon customer, so…we found a dozen different ways to explain how Verizon has a better network, and why better matters.”

Verizon launched the new campaign on the heels of the logo “refresh” designed by Pentagram. Incidentally, the Verizon logo debuted the same week as the new Google logo.

What do you think of

In a story about the Verizon campaign, Adweek wrote: “The theme of this work is ambitious and suggests only Verizon can fully deliver on “the promise of the digital world.” Its central analogy, illustrated with a series of colorful metaphors in a dozen ads from W+K’s creative team, holds that a higher-quality network leads to a better quality of life, especially when it comes to everyday convenience.”

Creative directors Aaron Allen and Jason Kreher echoed that message, telling Adweek, “The challenge was explaining some pretty dry facts in a way that would resonate.” The varied nature of this campaign “ensured that production would be a huge challenge, but it resulted in a ton of good work that helps Verizon stand out from the competition.”

Verizon uses an array of images to show why its network makes life better. Watch A Better Network Explained by a French Scuba Diver.

In working on the Verizon campaign, W+K determined which concepts would be most salient and worked with their clients to find different ways to explain how Verizon has a better network, and why better matters. It included highlighting characteristics like the 4G LTE network, its capacity, reliability and coverage, as well as its unique access and exclusive offerings. It helped W&K to come up with solid creative because Verizon had real value to offer.

There are always going to be people who complain about their individual experiences with ANYTHING. But I believe Verizon works hard to earn its top metrics and customer loyalty by providing a great network, and in the bigger picture, providing value and service to a broad audience, even beyond their customers*.

At the end of the day, advertising is about making consumers feel they need a product or service, or to feel good about their connection with something. When an ad agency’s client has great offerings, it’s a heckuva lot easier to tell the story.

My collaboration with Verizon began in 2014, and I’m proud to participate as a member of their social media outreach team. My posts are about my own personal experiences.  No compensation is provided, nor are favorable comments promised. All opinions are my own.

The Horsfall House in Randle, WA